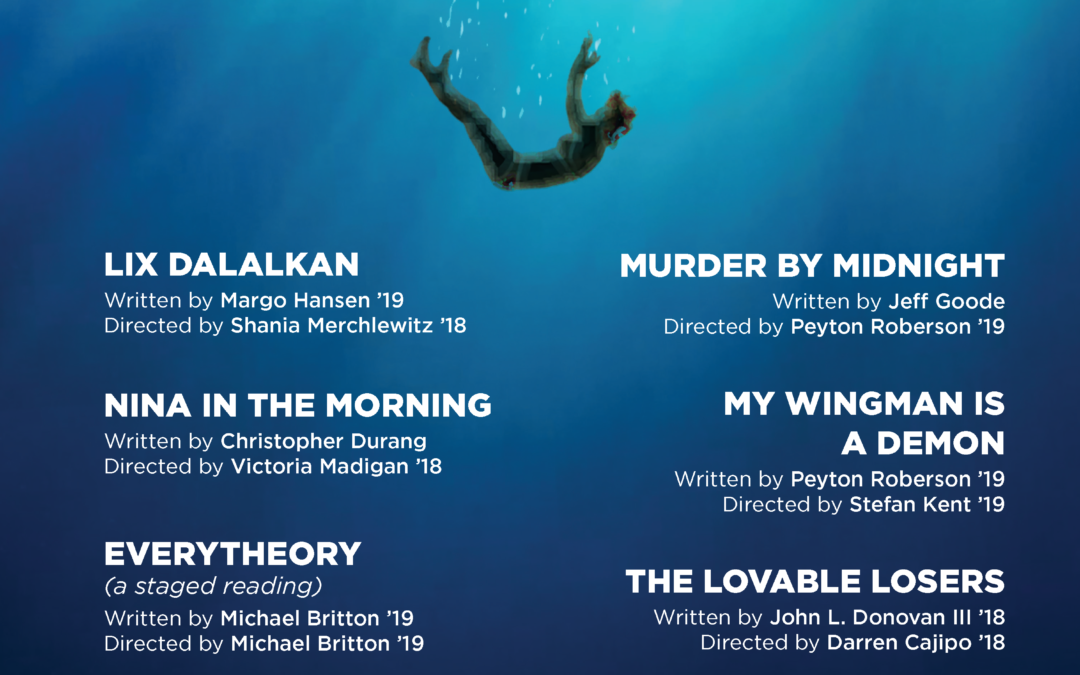 The showcase will feature a number of short plays, some of which were professionally written, others which were student-created, and all of which will be produced, designed, directed, and acted by the students of Saint Mary’s Theatre and Dance Department. There are a number of Saint Mary’s students who are involved in bringing the productions to life, and they each have different roles and responsibilities to help with SPLaSH!

Saint Mary’s senior Celeste Nygren is the production stage manager for SPLaSH! In her role, Nygren is “the one who makes all the six different shows come together in one production for the evening.” She has been a part of Saint Mary’s theatre program for the past three and a half years. Nygren really likes the fact that SPLaSH! is “student driven. So rather than the faculty being the main director and the one in charge, students are the ones doing pretty much everything.” Nygren has found her biggest challenge, by and large, to be the fact that “there are six shows. Due to this, there are six different directors, six different stage managers, six different casts, and there are a lot of moving parts. It is difficult to make it all cohesive into one—hopefully—pleasant show experience.” She concluded by saying, “SPLaSH! specifically is a great opportunity for seniors and freshman and all grade levels to work together, and for more experienced people to teach less experienced people.”

Another short play being performed this year is Tony-award winning playwright Christopher Durang’s Nina in the Morning, as directed by Saint Mary’s senior Victoria Madigan. Within her role, Madigan has to “read the script, map out a blocking plan, block the actors, find the actors, and pretty much help the actors create this realm of what the play is going to be.” Madigan has four years of theatre experience to back her in her role as director. In this production, she has found the biggest challenge being able to “orally give out what I am thinking when it comes to what I want my actors to do. Just to be a director has been interesting.” On a final note, she reflected that “So far this one [SPLaSH!] has been amazing. I’m excited that I’m leaving Saint Mary’s with this SPLaSH! under my belt.”

Another Saint Mary’s senior involved in SPLaSH! this year is Shania Merchlewitz, who is directing the play Lix Dalalkan, written by Saint Mary’s student Margo Hansen. Within her role as student director, she needs “to make sure that everyone is on the same page with what the show should look like. That includes designers and actors. What my role is not, and what a lot of directors get confused about, is to come up with what the actors should be doing or how the designers come up with their design. That is taking away from their creative process. My role is just to make sure that it all comes together and makes sense together”. Merchlewitz has been involved with theatre productions in some way since her freshman year at Saint Mary’s. She really enjoys the fact that she’s “working on a student written play, so it’s the world premiere and it’s really great to have the first say in how this is going to be run, and to bring a friend of mine’s work to life on the stage.” As for challenges, she has found them to be “finding the tools I need to help the others along in their areas, because I’m still learning as a student, too.” She says “there are certain times when there will be an issue with grasping the objective of the line, and it’s like, I know what it should be, but I don’t know what tool to give the actors to help them find it in their own way.” Merchlewitz recommends, “if you haven’t experienced theatre, it’s worth it. I think everyone should go and give it a shot.”

Saint Mary’s junior Stefan Kahlstorf is also a part of SPLaSH! He will be directing student Peyton Roberson’s My Wingman is a Demon. As a director, Kahlstorf will have to “make a plan for blocking, communicate everything back and front to the actors, and communicate the directions of what the directors want” for the production. Kahlstorf has been a part of the theatre department since his freshman year. As he sees it, this is a “really good opportunity to apply what you’ve learned in the Saint Mary’s theatre department. You also get to work on student written works, which is really cool.” His biggest challenge has been scheduling. “It has been going really smooth, we just have to make sure that we’re not rehearsing at the same time, which is a bigger challenge.” Kahlstorf believes “people will really enjoy it. It is high quality work. It’s a little different from the stuff we’ve done in the past” but that doesn’t take away from the fact that people will enjoy the production.

Saint Mary’s junior Peyton Roberson is directing Murder by Midnight, by Jeff Goode, and he also wrote My Wingman is a Demon. As a director, Roberson needs “to make sure my actors are prepared. I have this vision for how the play is going to be, and I make sure that the actors are performing to that ability by knowing their lines, incorporating their own ideas. It’s like being in charge of a process instead of just a quick show.” Roberson has been involved in theatre since the start of his freshman year, but this is his first time directing a production. “This is all student produced, which is really cool. The directors are all students, four of the six shows that we’re directing are student written, it’s student designed, it’s student put-up, it’s student acted, it’s just all students. It gives us the chance as a department to show what we can do and what we’ve learned.” For challenges facing him, Roberson claims “I haven’t directed before. Directing is a lot of pressure, it’s a lot of responsibility. You have to make sure that everything is going well, you talk to the designers, you talk to your stage designers, you talk to the actors, and if something goes wrong, it’s usually traced back to the director, and the director is usually the one at fault. It’s a lot more than just bossing people around—there’s just a lot of responsibility.” Roberson would “like to emphasize the fact that it’s a student done production. It’s 95% student done, and the fact that it’s a main-stage show for the theatre department, I think it’s going to be really cool to see.”